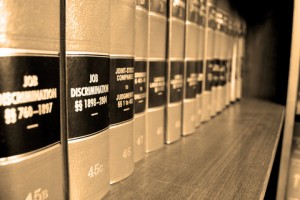 A myriad of issues, problems and opportunities face employees today. From racial discrimination to sexual harassment, the employment law attorneys at Merritt Webb are experienced in virtually all aspects of employment law and advise clients every day in matters involving the following North Carolina and Federal employment laws.

Most employment relationships in North Carolina, South Carolina and Tennessee are governed by the employment at will doctrine. In the absence of a contractual agreement between an employer and an employee establishing a definite term of employment, the relationship is presumed to be terminable at the will of either party without regard to the quality of performance of either party. Generally, either party to an employment at will contract can terminate the contract at will for no reason at all, or for an arbitrary or irrational reason. Federal and state statutes have created exceptions prohibiting employers from discharging employees based on impermissible considerations such as the employee’s age, race, sex, religion, national origin, or disability, or in retaliation for filing certain claims against the employer.

Discrimination on the basis of race, age, sex, national origin, religion, or disability is illegal. Learn more about the laws that govern discrimination in the workplace.

Sexual Harassment is a common form of harassment which includes: unwelcome sexual advances, requests for sexual favors and other verbal or physical conduct of a sexual nature where submission to such a conduct is explicitly or implicitly made a term or condition of employment or submission to or rejection of such conduct is used as a basis for employment decisions or such conduct has the purpose or effect of unreasonably interfering with one’s work performance or creating an intimidating, hostile or offensive work environment.  Sexual harassment is a form of sex discrimination. Employers may not harass or allow their employees to be harassed. Learn more about sexual harassment. Discrimination against persons based on genetics testing or genetic information.

In North Carolina, employers are covered by the Retaliatory Employment Discrimination Act (“REDA”), which prohibits discrimination or retaliation against an employee because the employee in good faith does or threatens to file a claim or complaint, initiate any inquiry, investigation, inspection, proceeding or other action, or testify or provide information to any person with respect to any of the following:

Discrimination against persons based on genetics testing or genetic information.

In addition to the actions prohibited under REDA, North Carolina state law prohibits discrimination, including discharge of an employee because of the following reasons:

In South Carolina, A claim for retaliatory discharge for filing a workers’ compensation claim must be filed within one year of the discharge. Other examples of protected rights or issues giving rise to wrongful termination claims include termination for joining or forming unions, serving on jury duty, filing a complaint with South Carolina Human Affairs Commission or the Federal Equal Opportunity Commission, filing a complaint with the South Carolina Department of Labor, filing an OSHA complaint, requesting information concerning toxic substances in the workplace, requesting military duty leave, and appearing in court as a witness.

Filing deadlines under the discrimination and harassment statutes are short and strictly enforced. A complainant must file a complaint with the Equal Employment Opportunity Commission (EEOC) within 180 days from the date of the alleged violation of the law. This 180-day filing deadline is extended to 300 days if the charge is also covered by a state or local anti-discrimination law and a Fair Employment Practices Agency (FEPA) is responsible for enforcing those state or local laws. For ADEA charges, only state laws extend the filing deadline to 300 days. In North Carolina, the EEOC has offices in Charlotte, Greensboro, and Raleigh.

Talk to an employment law attorney at Merritt Webb for advice on employment or labor law issues and your specific situation. If you need our help for such a claim, call us at 1.800.556.8404.

No guarantee as to currency of information: Due to how quickly the law can change without advance notice, the information contained in this website is not and cannot be guaranteed always to be completely up-to-date. We try to keep it current with frequent updates and review, but that is not always possible on a day-to-day basis.